Home
Companies
TeamApt Profile – About, Employees, Net Worth, Funding, And All You Need To Know

TeamApt Profile – About, Employees, Net Worth, Funding, And All You Need To Know

TeamApt is a financial technology company located in Lagos State Nigeria. They are focused on developing Digital Banking, Business Solutions, and Payments Infrastructure.

TeamApt was founded by Tosin Eniolorunda. Prior to establishing TeamApt, he worked in Interswitch as a designer for a virtual point of sales machine. While working in the bank, he observed the growing digital banking needs of banks. He said that he noticed their need and the role technology companies will play to accelerate these needs. He also noticed the impact money transfer inefficiencies had on all consumers and a remedy popped into his head.

After a few months, his idea was bought by some of his friends that joined him to build his idea. They are  Odun Adeboye, Felix Ike (both were ex-Interswitch employees), Adrian Agho, and Emeka Ibe. Together, they formed TeamApt to build their brainchild. Soon after, Tunde Ogidan joined in again from Interswitch to complete the founding team.

Related: Paystack Profile: About, Employees, Net Worth, Funding, And All You Need To Know

The name, Teamapt, was borne out of the work the team put into developing the platform and the synergy they worked with. They have a goal to use their team spirit and provide stronger payment systems across Africa.

Most startups desire and begin to woo potential investors at the early stage.  However, the case differed for Tosin Eniolorunda and his team. They decided not to take external funding, at least, not at the early stage of their business. When they were asked about it, he revealed that In the bid to satisfy investors and keep them excited, a lot of businesses are usually stifled.

The resultant is making fewer attempts to take risks or innovate spontaneously, as they deem fit. Teamapt was not prepared to take such a decision at the expense of their innovation and creativity as the desire was to deliver quality service. They relied on the notion that humans pursue value. He said, “Since people will jump on you when you have value, it’s better to prove that you have value first, then come back to place a demand on that value”.

When they were asked how they raised funding, it was revealed that Tosin Eniolorunda was the major financier of their project. His personal savings were used to invest in the company. The majority of the money was also generated from other jobs they did on the side.

The marketing strategy proved difficult a bit as they had to pitch their ideas to banks. The first bank that welcomed them was Fidelity Bank. A top Fidelity executive who was with them from the beginning said “We wanted a more efficient and automated way of reconciling these transactions, then TeamApt came along, we tried them with one or two products to reconcile and it worked out. So we decided to go all in.”

TeamApt began to grow gradually and in two years they began to hit seven-figure annual revenue in dollars. They moved from Fidelity Bank to First Bank to Access Bank and in recent times were the developers of launched ALAT by Wema.

The company was launched officially in the year 2015. Since it’s launch, the company has facilitated fifty-five tailored solutions to twenty-six African banks, including 100 percent of Nigeria’s commercial banks.

After they observed the speed at which banks accepted their services, they launched a digital banking solutions service and still not letting go of their core value which is financial happiness. 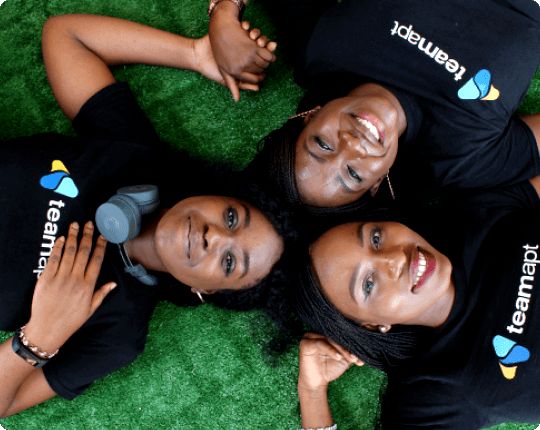 They have also gone ahead to initiate the digital banking system with some banks like First Bank, UBA, FCMB, and some other banks, which are up to 10. It was easier because they had already built a working relationship with banks.

Related: Flutterwave Profile: About, Employees, Net Worth, Funding, And All You Need To Know

The company has been growing steadily. In April 2019, they secured a switching license from the Central Bank of Nigeria (CBN). The aim was to increase the impact of AptPay, which is one of the services they render.

TeamApt, in order to secure the future, now builds apps that will be of service to the digital needs of people in the future. One of which includes the first instant transfer app that is based on blockchain.

TeamApt has about a hundred and twenty-seven staff under its employ. The reviews have read that it’s a great place to work as everyone bonds like a family. Some other reviews read that working with Teamapt can be quite challenging. You either learn how to sink or swim.

The Chief Executive Officer is Tosin Eniolorunda. Other executives include Leslie Williams who is the Creative Director and Elaine Delaney who is a board member and Director of Zenith Capital Limited.

The investor in Teamapt is Quantum Capital Partners, represented by Elaine Dulaney and they have been part and parcel of the organization since February 2019.

The first series A funding for Teamapt was in February 2019 and Quantum Capital Partners, were the participants. They were able to generate 5.5 million In the first round.

The salary scale for individuals in Teamapt includes

The exact net worth of TeamApt is not recorded but they are estimated to be above $500,000.

TeamApt fintech company has recorded considerable growth and are set to expand beyond Nigeria. They have also positioned themselves to seize the future when the time comes. You can find out more about TeamApt fintech from here.

If you’re reading this article now, it means that i …